In Australia, kangaroos are considered pests by many farmers and graziers. They claim that kangaroos compete with their livestock and cause damage to crops, fences and equipment. Some farmers would like to see kangaroos erased from the landscape.

This story is not a new one. Farmers hunted the Thylacine, commonly known as the Tasmanian tiger, to extinction. 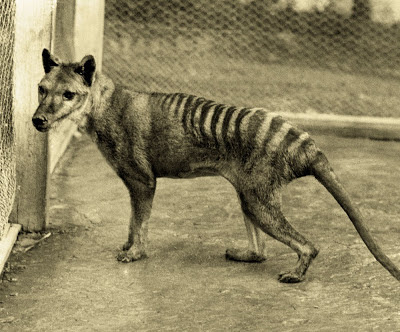 A 2011 study finally revealed that the Tasmanian tiger was not a threat to sheep. The study was published in the Journal of Zoology. The study concluded that the Thylacine’s long jaw could open to an amazing 120 degrees but was too weak to kill sheep.

“Our research has shown that its rather feeble jaw restricted it to catching smaller, more agile prey,” said lead author Marie Attard of the University of New South Wales.

The Thylacine was hunted to extinction due to fear and misinformation.

History is repeating itself. The Australian authorities and farmers learned nothing from past mistakes.

We live on 11 acres in between farming land. Once upon a time, kangaroos used to visit our property in summer in search of shade and water. Most of Australia’s land has been cleared, which means that shade for kangaroos is much harder to find. We only saw kangaroos in summer, never winter. Now we don’t see kangaroos at all.

The neighbouring farmers grow winter crops, usually wheat. As I said above, we only saw kangaroos during summer, at a time when the farmers are not growing crops. In summer, there aren’t any crops for kangaroos to damage.

From personal experience, we can state categorically that kangaroos do not damage fences or equipment. The whole idea is absurd. Kangaroos leap fences as they travel across the land. They lay in the shade of trees during the day. At other times, they graze, drink and socialise.

We’ve completed much research and we cannot find explanations of how kangaroos damage fences or equipment. All we can find is the assertion that kangaroos cause damage but nothing to back up these claims.

Birds, on the other hand, damage the seats of our outdoor chairs, using the stuffing to make their nests. We’ve seen birds peck at our taps in an attempt to get to water and in the process damage our taps. We make sure to leave plenty of water out for our feathered friends. Strong winds are frequent. They are extremely damaging and drying to the native trees we’ve planted. Dust storms are a regular weekly occurrence, obviously causing soil erosion. We’ve had fences damaged by cattle and sheep, both of which have strayed onto our property after escaping from neighbouring paddocks.

In 2002, Spooner et al. assessed 47 patches of remnant grassy woodlands in southern New South Wales fenced by Greening Australia approximately three years prior to exclude livestock. They compared these patches with unfenced sites for the purposes of studying the impact of grazing, mainly by sheep. The study revealed tree recruitment in 59% of fenced sites compared to 13% of the unfenced sites. The fenced sites also had more perennial grasses, fewer annual weeds and less soil compaction. The fences did not exclude kangaroos, which means that the differences can be attributed to the impacts of livestock, especially sheep.

Indeed, there is little convincing evidence of substantial damage by kangaroos to crops, pastoral production or rangelands, except in a few localized areas (Penny Olsen & Tim Low, 2006).

The strong, persistent piospheres (damaged areas) around dams, with severe degradation evident closest to the water points, are created by livestock rather than kangaroos, whose distributions reflect availability of food more than water (Penny Olsen & Tim Low, 2006).

Kangaroos DO NOT compete with livestock.

In 2000, two studies (Pople and McLeod, Olsen and Braysher) concluded that competition between sheep and kangaroos seldom occurs because food is not limited or food choices and feeding sites differ.

In a survey of kangaroo distribution in the rangelands of South Australia, Jonzen et al. (2005) were surprised to find a positive correlation between kangaroo numbers and livestock numbers. They proposed that livestock presence was a surrogate for resource availability, although there was no evident correlation between rainfall and kangaroos. Several studies in the previous review also reported positive relationship between stocking rate and kangaroo density. These findings support the conclusion that kangaroos and livestock do not compete strongly for food (at least in the rangelands), that resource availability drives the grazing system, and that mixed species grazing regimes are more productive and ecologically sound (Penny Olsen & Tim Low, 2006).

Kangaroos and sheep have not been demonstrated to compete to any significant degree because of differences in diet and spatial use of pastures, except under very poor forage conditions. Grigg (2002) cast serious doubt upon the common assumption that kangaroos have 70% of the food requirements of sheep (a DSE of 0.7), proposing that the correct figure may be 20% (a DSE of 0.2). Dawson and Munn (in press) have since improved the estimate, to 0.48 (48%) using captive animals. This decreases any likelihood of competition and economic loss associated with grazing by kangaroos, and suggests that predictions and estimates based on the old DSE estimates exaggerate kangaroo impacts (Penny Olsen & Tim Low, 2006).

Various studies that compared vegetation growth in different situations (fenced/unfenced, grazed/ungrazed, and along gradients from watering points) reinforce the conclusion of earlier studies that sheep (and cattle) produce substantially and consistently greater changes to native vegetation than grazing by kangaroos. Mixed species grazing systems tend to be the most productive in the agricultural sense (Penny Olsen & Tim Low, 2006).

It’s important to remember that in 2013, there were 11 million sheep in South Australia compared to 3 million kangaroos.

Skippy, We Killed Ya