Kangaroos are commercially hunted across New South Wales, Queensland, Victoria, South Australia and Western Australia. They are sold as pet food and leather. Their skins are sold to international shoe companies such as Adidas, Nike, Reebok, Puma, Florsheim and various other European and American shoe manufacturers. The Federal Government is responsible for monitoring the industry in the commercial hunting states, and is bound by the Environmental Protection Biodiversity and Conservation Act 1999, to ensure the protection of biodiversity and native species.

Tragically however the Federal and state governments have failed to protect kangaroos, with government data exposing a commercial trade in leather and meat, combined with severe drought, decimating kangaroos to the edge of extinction across most of New South Wales, Queensland, Victoria and South Australia. Red Kangaroos, Western and Eastern Grey Kangaroos, Wallaroos and Euros have been hunted to critical levels of less than 5 kangaroos per square kilometre, densities defined by the Murray Darling Report as “quasi extinction” and meaning, “The nominal value of kangaroo densities taken to indicate the effective loss of the species” (Hacker et al, 2004, p.62).

As stated earlier, all commercially hunted kangaroos are now “quasi extinct” across most of New South Wales, Queensland, Victoria, Western Australia and South Australia, and as predicted by the Murray Darling Report, led kangaroo numbers to fall even further to less than 2 per square kilometre across the states: “critical minimum densities are not clearly defined but populations below 2 kangaroos per square kilometre would generally be considered at risk of extinction” (Hacker et al,2004, p47 ).

(The above is an excerpt from a submission to the Federal Government by Pat OBrien, President Wildlife Protection Association of Australia Inc.) 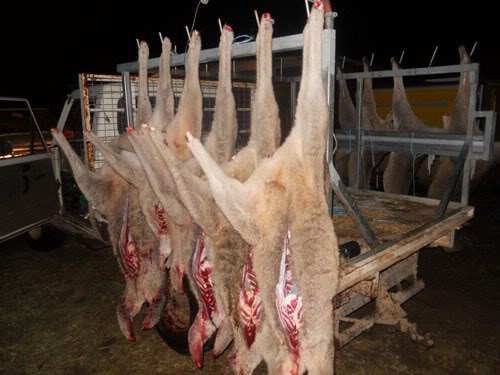 Skippy, We Killed Ya